What I Learned From Writing a Song a Week

I'm coming to the end of a nearly two-year project, writing a new song most weeks for a current events program on community radio. Take5 has a "can-do" spirit and its executive producer was open to the idea of having a songwriter write something every week, inspired by a story on the show. Ultimately I wrote 69 songs for the program, before I felt an inner signal that it was time to move on. I have a special affection for all of those Songs of the Week (unexpected gifts, each and every one) and I'm grateful for the lessons I learned while writing them. Here are some of them.

1. If you can write one song a week, you can write a dozen. Creativity fuels itself, and there is no limit to how many ideas one can have in any period of time. The limitations we place on ourselves are arbitrary. In most cases the "song" of the week was actually two or three or four, sometimes different approaches to the same topic but sometimes new songs altogether. I just picked the one that I found the most inspiring.

2. Nothing lasts. The Japanese concept of wabi-sabi is: Nothing is perfect, nothing is finished, nothing lasts. As each song was written, each song immediately passed into "last week". The practice of letting go, week after week, was healthy. Even when a song garnered further attention, it only did so for a limited period of time, because I had to keep writing.

3. I am deeply and continually influenced by others. In writing a song a week, I was constantly aware of the work of other songwriters, but instead of letting that get in the way (through comparisons, jealousy or worry over plagiarism) I decided to consciously invite the other writers in, as if to help. So I felt I was guided by a lot of invisible, experienced hands.

4. Each song matters, and doesn't. You have to imagine it could change the world and have momentous impact, while being aware at the same time that it likely will not. This awareness of two apparent opposites allows one to write something that neither lacks substance nor gets bogged down in a sense of self-importance.

5. It's okay to work every which way. Use every and any tool or method you can to accomplish your goal. Don't get locked into pre-defined methods of working. What worked last week might not be appropriate for this week. Stay flexible.

6. It's not a competition. I have a tendency to rank stuff and pick winners and losers. I noticed the inclination to do this with the Song of the Week, and I saw that all that ranking didn't matter at all. I could let go of trying to pick the winning horse or predict which song might "go somewhere". None of them could, and all of them already had.

6. Honour the seed. No matter how "polished" or "finished" I wanted the songs to be, they stubbornly remained exactly what they were: fresh, small, fragile things...each of which held the potential to gain confidence and strength with repeated playings. If I had gotten caught up in perfection and full-fledged-ness at the start, I would have stopped the project after a few weeks, realizing that the timeframe and my own limitations would never permit polished, concert-level performance. I remember the point at which I realized that. I'm glad I decided to continue...to honour the seed. In life, there are many such seeds.

7. If you believe in it, it will come. The most valuable technique I used was the belief that the song was meant to be, and that it already existed...and only need my midwifery to bring it to the world. That outlook was, I think, just as important as a wide range of guitar chords, a taste for novelty, a good work ethic, a willingness to experiment and to potentially fail, and a lifelong fascination with songs and the creative process--all of which were essential too.
Posted by Lynn Harrison at 11:06 a.m.

I've copied and pasted this, enlarged the font, printed it and hung it on my wall here in Hong Kong. "Lynn's Lessons to Live By". Most important for me: honour the seed.

Lynn, thank you so much for sharing your wisdom and energy. Your work really does matter.

Hi Lynn: Excellent lessons on the process of creativity. I especially liked the last one on letting creativity come. The universe does unfold as it should and it is there to work with us if we are open to it. Excellent point about moving on when you know it is time. Talk to you soon. Stan 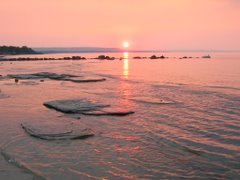 Reflections on songwriting, spirituality and creativity.